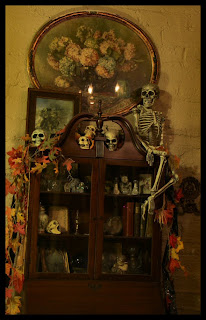 What a busy night this was!
It actually began in the afternoon when my witch and her cronies began decorating the front porch with big round vegetables.  Onto these, they carved assorted faces before inserting a candle into each one.
I tried climbing into one of the vegetables just to see if I would fit. (I did.)  The witches laughed and insulted me by saying I was “cute”, so I promptly jumped out.  After that, it took an hour of bathing to get my fur clean again.
Meanwhile, my mistress and her friends scurried off to the kitchen.  Besides making a lovely pork roast for my supper, they amused themselves by concocting great quantities of popcorn balls.  I’m not particularly fond of those, but I let them have their fun.
I was, however, curious when they proceeded to pile the balls into a large cauldron that was set by the front door.  Around dusk, when hordes of short demons began appearing on the porch, the reason for their mysterious action became clear.  The popcorn balls contained a powerful protection magic!
A demon’s attack upon the front door is apparently thwarted when one of these balls is forced upon it and, in a fit of frustration, the evil beings then disappear into the night.  My witch is so clever!
As the evening wore on, the demonic assault wound down.  I crawled out from behind the sofa.  My mistress and her cronies collapsed around the hearth.  As you can imagine, we were all exhausted from the frightening ordeal!
I was sitting in the middle of the parlor rug, dazed and reflecting on the night’s events, when one of my witch’s friends remarked, “I do believe Grimalkin sees a ghost!  Look how he’s staring toward that corner of the room.”
“Well,” smiled my own witch, “they say that cats will perceive a ghost long before a human does.”
We do?
“Nonsense!” someone else said.  “I noticed that spirit hovering over there as soon as we sat down!”
She did?
Now everyone, including yours truly, peered intensely at that particular area of the room.
“I see it too!” another witch piped up eagerly.
I didn’t see anything… but this gave me an idea for a bit of fun.  I suddenly leaped in the air, fluffed my tail, arched my back and hissed in the direction of the “ghost” before dashing like mad from the room.  I skidded to a halt halfway down the hall, then tiptoed back and peeked around the corner at them.
The witches were all sitting very still and looking at other with eyes the size of ping pong balls.  Finally, one of them said in a hesitant voice: “I don’t think this ghost is particularly friendly.   Perhaps we should do a Cleansing?”
Posted by Grimalkin at 3:35 PM