My Moon is Missing! 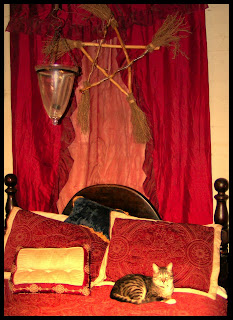 I looked in the sky tonight, then did a double-take and looked again.  No wonder it was so dark outside.   My moon was gone!    I went to every window in the house and pressed my nose against the glass.  I tell you: The moon simply was not there.
I even ran to the bathroom and peered into the tub.
Sometimes my witch invokes little moons to come down and float on the water that she bathes in.  I thought perhaps one of her “Purification Rituals” had gone awry and that she’d forgotten to release the moons afterward.
But no, the tub was dry.
Should I inform my witch that the moon has been stolen?  I don’t wish to alarm her.
Perhaps whoever took it will bring it back before she notices…
Posted by Grimalkin at 2:56 PM 7 comments: 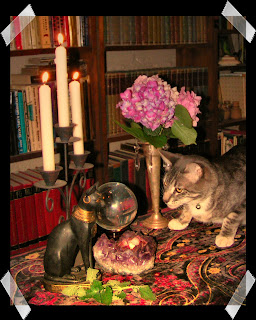 My witch is finally giving me the respect that I deserve.  Today, she placed a statue of me on her altar. She even placed a sprig of catnip in front of my likeness as an offering to me.  (I could get used to this!)
The image is a quite stylized approach and rather nice, but the artist was apparently unable to do justice to my excellent markings and immaculate little white paws.  He therefore resorted to coloring my statue in black with gold trim.  However, I’ll forgive him since only the Gods could create such an intricately patterned coat such as mine.  Humble as I am, I’m content to have even a crude semblance of myself in this place of honor!
But why does my witch keep referring to my image as “Bastet” instead of “Grimalkin”?  It must be a new term of endearment that she’s invented for me…
Posted by Grimalkin at 4:41 PM 4 comments: 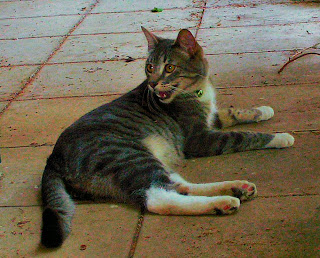 Mindful of my duties as a Familiar-in-Training,  I followed my witch and her Cronies into the garden yesterday.  Although I was fully prepared to assist in their Midsummer Festivities, the searing heat quickly changed my mind.  (I even spotted a few fairies under the bushes fanning their little faces with leaves.  That was a first!)
I consider myself to be extremely fit and athletic.  Nevertheless, I confess that I soon collapsed in the shade on the front porch, panting like a young lion.
Meanwhile, there was my silly mistress and her friends, still out capering and celebrating beneath the blazing sun.  I’d have concluded that witches must be impervious to the heat – except for the fact that they were all very red faced and their skin was leaking water at an alarming rate.  This was truly Midsummer Madness!
It occurred to me that none of them are exactly kittens anymore.  I fully expected one of the witches to topple over at any moment taking the others with her in a domino effect…and then what would I do?  Call 911?  Get the dogs to assist me in dragging their limp carcasses into the pond, one by one, to revive them?
You can imagine my extreme state of agitation and concern as I pondered the various courses of action!
I finally decided upon the only sensible solution… I closed my eyes and took a nice, long nap.
Posted by Grimalkin at 1:59 PM 1 comment: 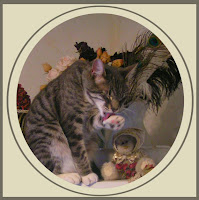 It wasn’t my fault!
And who the heck makes tables with only 3 legs?  They’re dangerous – especially when a kitty comes racing into a room and lands on top of one.
Over went the table and every blessed object that was on it ...including me!
As I sat in the midst of the rubble, my head swimming and congratulating myself on escaping any injury, my witch came rushing in.  She stopped on the threshold and surveyed the damage.
I was on the verge of assuring her that everything was fine because I hadn’t been hurt, when she suddenly wailed: “Grimalkin!  My favorite mirror!”
I glanced down at the shards of thick glass mingled with the rest of the debris.
“That’s seven years of bad luck for YOU, mister!” she said sternly.
Me???  It was her mirror!  Why should I have the bad luck?
Then I saw the look on her face and realized it was because it will probably take her that long to forgive me.
Posted by Grimalkin at 2:28 PM 3 comments:

Drawing Down the Moon

For some reason, witches get in water on purpose!    They call it a “Purification Bath” and I watched in horror as my own witch subjected herself to this strange torture the other night.
She said we were preparing to perform a ritual called “Drawing Down the Moon” .
She lit candles, ran water into the tub, sprinkled salt and then poured in a wondrous potion.  The tub immediately became filled with thousands of little iridescent full moons!  My mistress then divested herself of every stitch of the protective garments that she normally wears and proceeded to immerse herself in the water.
Fascinated, I perched on the rim of the tub and studied this strange enchantment. My naturally inquisitive mind led me to discover that, when I batted a floating moon with my paw, it would mysteriously explode, disappear and then others would shift to take its place.  I was witnessing a microcosm of the universe!
Suddenly, my hind paws slipped.    I found myself submerged in water and moons up to my scrawny neck!   Yours Truly was in Serious Danger of drowning and I told my witch so in a very loud voice.    Suddenly this big tub filled with little moons was NOT fun!
She lifted me out, dried me off with a towel and then applied ointment and bandages to her legs, hands and arms.  I was, naturally, rather zealous in my efforts to save myself.
After this experience, I’ll observe her Purification Baths from a safe distance, Thank You Very Much!  She can draw down those silly little moons by herself from now on.
Personally, I have been traumatized for life!
Posted by Grimalkin at 9:25 PM 7 comments:

My witch harvested herbs today and I helped her by sorting and rearranging the bundles in her basket.  (Not that she appreciated my efforts!)
She lectured me a great deal as we worked, thus furthering my education. I payed close attention and took meticulous notes:
Raspberry leaves, she said, are good for pregnant ladies who are expecting kittens.
Strawberry leaves are for teenagers who have bumps on their faces.
Chamomile, she added, makes a wonderful hair rinse for golden hair like hers.
Note to self:  Witches must be color blind because even I know there’s a big difference between gold and silver!
Nightshade berries, she said, are for Hecate and Dark Moon rituals.  She caught me batting around and chasing a few that had fallen  out of her basket and snatched me up with a stern warning.  They must be dangerous indeed – only to be handled by experienced witches….not little familiars-in-training like me.
Magical  Lesson:  Just because an herb is pretty and looks like a plump, juicy morsel, doesn’t mean it’s  tasty or safe to play with!  Check with your witch…
Posted by Grimalkin at 8:28 PM 3 comments: