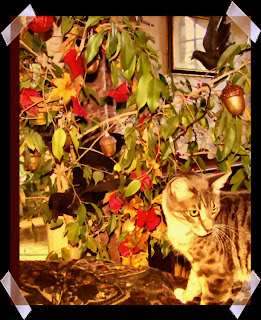 Once again, my mistress has seriously underestimated my prowess as a hunter.
Just because I’ve never actually deposited a bird carcass at her feet does NOT mean that I am incapable of catching the twittering things!
However, she has recently installed an entire flock of imitation crows among the branches of a small tree she keeps captive in the living room.  I assume she expects me to practice my skills on these?
Hopefully in the morning, when she finds every last one of these feathered fakes demolished, she will learn to regard my abilities in this matter with the proper respect!
Posted by Grimalkin at 10:19 AM 15 comments: 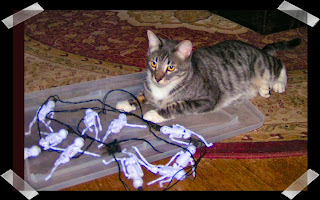 Today, my witch started decorating for a festival she calls Samhain.
It must be terribly important because it involves lots of boxes being hauled into the living room. From one box came long strings of skeletons that lit up with a hideous green light.  They were terribly fierce looking, but I successfully eliminated the threat before my mistress could touch them.  Their bony little arms and legs were scattered everywhere by the time I was done.
After that, I examined each item in every box and made sure it was safe for her to handle.
There was a very suspicious looking cat that was covered with black bird feathers of all things!  My unsuspecting witch had her back turned when I discovered it.  Who knows what might have happened!  However, it is now half bald and cowering behind one of the chairs.   I’m pretty sure I rendered the demonic thing helpless before it had a chance to attack her.
A Familiar’s work is never done!
Posted by Grimalkin at 6:40 PM 5 comments: 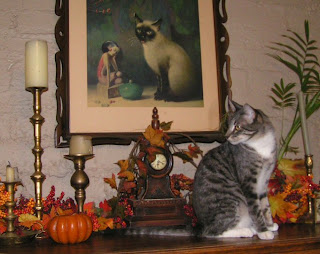 I’m beginning to suspect that witches are inherently unstable and frighteningly unpredictable.
Let me explain that my mistress is usually rather fastidious when it comes to housekeeping.  In my opinion, this is as it should be.
Yesterday, however, instead of dusting the cobwebs from the ceilings of the cottage, she actually stood on a ladder and added TO them.  And I’m not speaking about a single strand here and there... Oh no!   Great masses of webs are now strung and hung everywhere.
And, instead of sweeping up the dead leaves tracked in from outside, she has deliberately scattered armfuls of them around the tables, across the mantle and even on her altar!
But, here’s the really odd part, kittens:  After that, she went OUTSIDE and raked up the leaves that had fallen naturally on the lawn (where they DO belong) and then tidily disposed of them.
The older and slower cats have calmly informed me that this strange madness affects my witch every year around this time.  They’ve assured me that in a week or two she will indeed recover.
I wish I could share their confidence.  I am determined to keep a very close eye on her for any further signs of suspicious activity…
Posted by Grimalkin at 1:07 PM 4 comments: 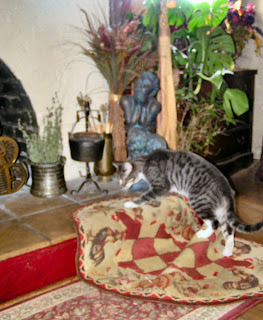 Undaunted, I tried again from another angle.    I backed to the edge of the living room and sprinted to the rug.
My rug and I were just on the verge of Lift Off when we crashed again – this time into the raised hearth of the fireplace.  I shook my head to clear the celestial vision of stars that I was seeing and climbed off the rug to analyze the situation.
The carpet had definite potential.  What we needed was more room.  So I sat and thought and then I thought some more. ..
This morning, when my witch woke and wandered out to the kitchen to make coffee, she noticed the absence of the rug.  In searching, she found it crumpled by the hearth in the next room.  She scratched her head in bewilderment and carried it back to the kitchen.
I never said a word that would enlighten her.  I didn’t even mention  the fact that I had been up all night Thinking.
However, with YOU, dear Reader, I will share the results of my Thoughts:
I have observed that when the dog has an “accident” on one of the rugs, my mistress cleans it and then takes the rug outside to dry in the sun.
I would hate to soil My Rug.  However, the dog is certain to be blamed for the mess and, with my carpet outside, there will be plenty of room for me to get airborn.
A Win/Win Situation, don’t you think?
I’m going to try it!
Posted by Grimalkin at 1:05 PM 5 comments:

What to do with a Sick Witch?

With an entire arsenal of potions and herbs at their fingertips, who’d ever suspect a witch could get sick?
Yet here mine is, red eyed and red nosed, hacking and coughing while filling receptacles with spent tissues that are too yucky for even a dog to dig out and play with.  All in all, it’s pretty disgusting.
The Heavens know, I’ve done my best to help!
As she lay in bed, I parked on her chest (where the trouble seemed to be primarily located) and attempted to purr my Healing Magic into her.
Ungrateful wretch!   She compared my delicate weight to that of a fat elephant and then had the audacity to sneeze in my face!
A kitty can only take so much.   I promptly moved out of range and onto the nice warm area where her head met the pillow.  Perhaps from here, I could influence her mind to make the body better?  I closed my eyes, meditated and purred.
My mistress was totally uncooperative.  She quickly rolled over and dislodged me.
Well!  If she insisted on refusing my help and succumbing to her illness, the least she could do was fill my food bowl first and clean the indoor box that she insists I relieve myself in!
However, when I made this gentle suggestion (pressing my nose against hers and meowing loudly to be sure she heard through her diseased haze) she only batted me away and groaned to be left alone.
And so, my fellow kittens, I ask you: What DO you do with a sick witch?  I’m at my considerable wit’s end!
Posted by Grimalkin at 4:08 PM 11 comments: