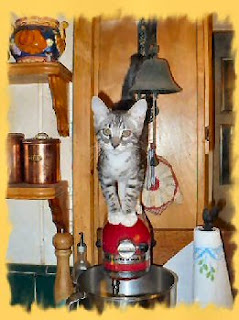 Last night I watched as my witch performed a Magic Ritual. It involved going around in a circle several times - rather like chasing one’s tail.
She did a number of other things I didn’t understand and then she rang a large brass bell. I figured it was time to start asking questions so I asked what the bell was for.
She said it was to announce Sacred Time.
This morning, I’d forgotten all about it and was playing in the garden when my witch called me for breakfast. I immediately stopped stalking the strange bug that was crawling through the leaves and came galloping into the cottage.
As I skidded into the kitchen, I realized that I was the first one there. The older and slower cats had not arrived yet!
Then I noticed the large bell hanging on the wall. Well, Mealtime, in my opinion, is certainly sacred!
So, as my witch dished up our bowls, I helped her out by leaping onto the counter and smacked the bell with my tail. It rang loudly, startling my witch so much that she accidentally dropped one of the bowls.
Sure enough, the older and slower cats were instantly summoned.
Magical Lesson for the Day - Sacred Time is whenever you want it to be. 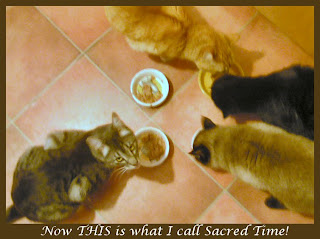 Posted by Grimalkin at 9:57 AM