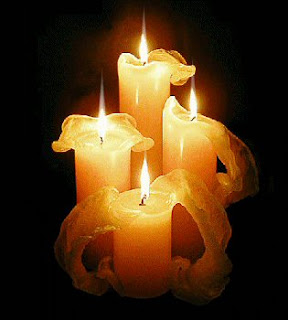 My witch was conducting one of her rituals last night. As a Familiar-in-Training, I was allowed access to the room and it was quite fascinating!
Fragrant smoke filled the candle-lit area. She chased her tail around a table a few times, all the while muttering to herself. I perched on the table to get a better view of the proceedings.
Finally she stopped and raised a knife into the air. Then she sniffed.
So did I.
Now, most of the smoke that my witch makes smells pretty good, but this time it was stinky!
Suddenly she yelled at me and grabbed my tail.
Let me assure you – as a Descendant of Feline Divinity, I am certainly not accustomed to this sort of treatment! I protested loudly and twisted around, fully prepared to deliver the punishment she deserved. But then I saw smoke rising from between the fingers that gripped my nethermost appendage. Either she was performing some sort of diabolical sorcery or… Great Catnip! My Tail was On Fire!
Luckily the flame did not reach my skin and, when she opened her hand, the fire was out. I can only assume that the Gods must have protected me.
I forgave my witch and amiably accompanied her as she went to apply ointment to her hand. Somehow she’d managed to burn herself. Apparently the Gods only protect cats.
Posted by Grimalkin at 11:09 AM